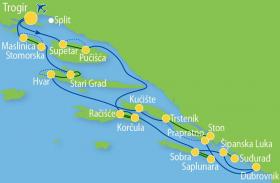 Eating and drinking
Your holiday includes half board. You will get a hearty breakfast and a 3-course meal for lunch or dinner, always prepared with fresh, local ingredients.

Island hopping with MY Relax from EUR 859 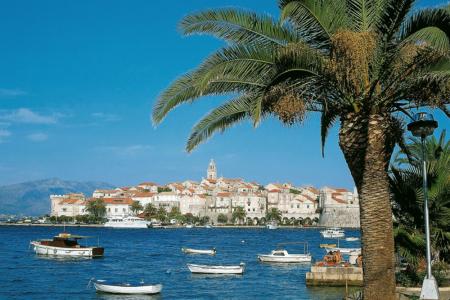 This boat & bike tour in Southern Dalmatia will take you to the Croatian coast’s ‘large’ islands. This is a vertiable wine lovers’ paradise, as each island offers its own inimitable grape varieties. Several people and cultures have left there mark on the region, Trogir and Dubrovnik being UNESCO world heritage sites awaiting your discovery! You won’t miss out on swimming either, and, if you feel like it, why not just stay aboard the luxurious motor yacht MY Relax.

Day 1 Arrival in Trogir, bike tour to Brač, 25 km/16 mi
Embarkation 0 - 2 pm, followed by a crossing to the island of Brač and the first cycling tour.

Day 2 Brač - Korčula, approx. 30 km/19 mi
Today you will take a ride along the pine forests of Korčula and get to the ship after passing Pupnat and Kneža.

Day 4 Elaphiti archipelago - Dubrovnik, approx. 10 km/7 mi
In the morning, you’ll be exploring the Šipan island, followed by the UNESCO world heritage site that is the city of Dubrovnik - there’s more than enough time to have a big look around.

Day 6 Pelješac peninsula - Hvar island, approx. 40 km/25 mi
Today you can learn more about wine-growing on Hvar, and the air is full of lavender!

Day 7 Hvar island - Trogir, approx. 20 km/12 mi
After the crossing you’ll cycle the length of the island of Šolta. It’s home to a type of honey which is very hard to come by but is said to be among the best in the world. Afterwards, you’ll return to Trogir.

Day 8 Breakfast and disembarkation
After breakfast, your boat & bike holidays in Southern Dalmatia has sadly already reached its end.

Here are the details on MY Relax.