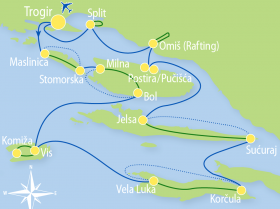 Eating and drinking
Your holiday includes half board. You will get a hearty breakfast and a 3-course meal for lunch or dinner, always prepared with fresh, local ingredients.

Dalmatia on DeLuxe Motor Yacht MY Relax from EUR 859 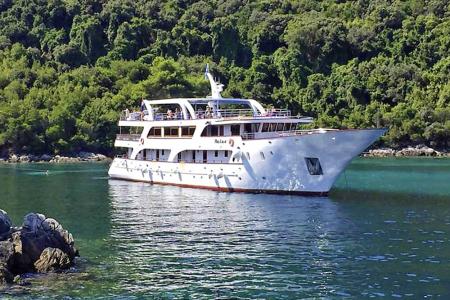 This island hopping in Croatia by boat & bike will take you to the large islands. This is a vertiable wine lovers’ paradise, as each island offers its own inimitable grape varieties. Several people and cultures have left there mark on the region, Trogir and Split being UNESCO world heritage site awaiting your discovery! You will go rafting on the Cetina, and swimming will not be neglected either. If you want, you can stay aboard the luxurious motor yacht MY Relax.

Day 1 Arrival in Trogir, transit to Šolta, approx. 19 km/12mi
Embarkation until 2 pm, followed by a crossing to the island of Šolta and a short cycling tour.

Day 2 Isle of Šolta - Isle of Brač, 43-55 km/27-34
Today you'll cross the Isle of Brač to reach Bol, a beautiful swimmming bay. You could also plan in a detour to Vidova Gora, one of the highest mountains in the region.

Day 3 Isle of Brač - Isle of Vis, approx. 32 km/20 mi
You'll be discovering the wine region on the Isle of Vis, which used to be a closed military zone.

Day 5 Islands of Korčula - Hvar - Brač, approx. 51 km/32 mi
The route today takes you along the vineyards and olive groves on the Isle of Hvar to Jelsa, then bot trip to Brač.

Day 6 Isle of Brač-Cetina Canyon-Split, 19-38 km/12-24 mi
Today a rafting tour awaits you, and you can jump into the river afterwards. In the evening you'll arrive in Split, where a city tour is planned.

Day 7 Isle of Split - Trogir, approx. 19 km/12 mi
Today a short cycling tour to the Marjan mountain and a swimming pause is planned. In the evening you take a walk in Trogir.

Day 8 Breakfast and disembarkation
After breakfast, island hopping in Croatia by boat & bike on MY Relax has sadly already reached its end.

Here are the details on MY Relax.

Included in "Island hopping in Croatia by Boat & Bike":

Arrival to "Island hopping in Croatia by boat & bike":